skip to main | skip to sidebar

Possibilities of a sustainable policing within the building could reduce the carbon footprint of Plymouth College of Art. My meeting today with George Dexter the financial Director of the college indicated that there was a need for a cultural and behavioural change within the make-up of the college. Although technological changes can be made to reduce the carbon footprint including building management solutions where rooms can be shut down from a central point, the real danger is these changes take time and development. To make a quick a noticeable response to the issue we need to act, or a select group with interest in sustainability needs to be formed to police this cultural change in energy reduction.
About a week or so ago I had the idea. Take the G-8 Summit then the G-12 these groups inhabited by major countries to form stronger opinions and make progress. I want to start a committee that takes a representative from each course to form a sustainable council within the college. This will thus give a contact point from various courses back to the main nerve centre of the college. The committee would be responsible for policing the actions of other students within the college.
Other developments include the go ahead for working the college into the Sustrans Bike Links to Schools scheme, enabling the college to build on their green transport plan. The plan is to link sustrans initiative for the development of Plymouth's cycle ways to schools. With PCA having nearly 83% under 18, it registers as a 6th form college allowing the future development of the colleges green transport links to be subsidised up to 80% match funding.
George Dexter also mentioned that there would be a possibility for an MA initiative for a sustainable committee to be developed within the college. the first project set on the MA being the reduction of CO2 has acted like a bug and has substantially changed my practice toward the current climate of reduction.
The CO2 Reduction Day is near, to be precise next Friday, it's going to be an all day event in the college foyer taking the results from the on-line survey and representing them in the form of an animation and with some information boards on why? when? how? including the government initiative for reduction and the cause for funding. the presentation will also include the future of reduceco2now! mine, Richard's and Alastair's new company and how we will proceed to impact upon the college as sustainable thinkers.
On the cards, an event or events. I aim to pick up where I left off in Studio 11 running another bring your own biro and producing its first publication. There is also a possibility for an event using the centre of Plymouth as my gallery. I would like to invite a selection of sustainable companies and designers to have a market in Plymouth launching a Sustainable market day demonstrating the issue of reduction across Plymouth and further a field putting Plymouth on the map.
Also with this I would like to call a cycling/walking/and public transport day with tours of Plymouth and afar around this day a critical mass in the evening and an event which will surround this. However these are just a few thoughts at the moment and will be researching to develop these activities.
Posted by william..leonard..amery at Wednesday, February 17, 2010 2 comments:

sit back and enjoy 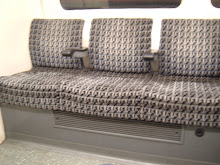